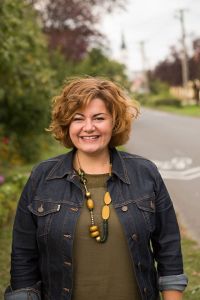 I grew up in Nasice, Croatia. I studied theology at the Evangelical Theological Seminary in Osijek, Croatia, and later moved to the Croatian coast to earn my Masters in event planning. I worked as an event manager in Zadar, Croatia for few years. Through a series of unplanned life events, I moved back to eastern Croatia and began ministering in a Roma community in Darda, Croatia. I was part of the team that planted the church in 2012 and have been serving there as part of the leadership ever since.

I am a part of the Roma Bible Union which is a network of Christians working together on projects that serve the Roma in Eurasia.

In 2014, Roma Networks was birthed, and I was privileged to be elected the first chairperson and be a part of its beginning vision and mission.

In the summer of 2017, I married Slobodan, and we continue to live and work in Osijek, Croatia.

One thought on “Nina Jankucić”